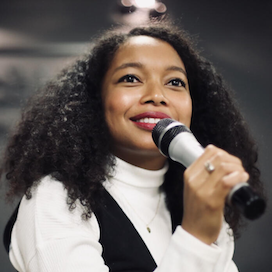 Abadesi is an entrepreneur, author and podcast host on a mission to build inclusion within the tech industry. Her company Hustle Crew helps employees and employers alike by sharing knowledge and creating a community. Having worked in London’s tech scene for many years, she highlights the inequalities that are built into what many think of as a forward-thinking industry. She also co-presents the podcast Tech-ish, discussing the latest technology news and how it intersects with social issues.

Abadesi Osunsade is the founder and CEO of Hustle Crew, VP of Global Community and Belonging at Brandwatch and the co-host of the Techish podcast. Across everything she does, her focus is on tackling inequality within the tech sector by providing resources for both organisations and individuals to educate on and promote inclusivity. With her company Hustle Crew, she has created an empowering community for those underrepresented and a learning platform for companies to foster a diverse workforce and equitable culture.

After graduating from the London School of Economics, Abadesi joined London’s tech scene working in roles at Product Hunt, Amazon, HotelTonight and Groupon. Despite being quickly promoted and helping significantly scale her departments she discovered that many of her male friends from university with the same (or lower) grades were working in similar roles at comparable companies but earning up to three times as much as she was. Realising that their privilege was providing them with discussions and mentoring that people like her weren’t party to she decided to set up her own community to provide the same support - and Hustle Crew was born. She also wrote Dream Big Hustle Hard: A Millennial Woman’s Guide to Success in Tech to share what she had learned.

In her podcast Tech-ish, alongside Michael Berhane, she explores how technology intersects with all aspects of society and culture. As well as discussing all the latest tech news they explore issues around social media, ageism and what problems tech could and should be solving. The down to earth and relatable content builds into her larger goal of inclusivity, getting listeners of all backgrounds interested in and engaged with technology.

Abadesi examines the nuances of gender and race inequality in the workplace and the vital importance of acknowledging individual roles in perpetuating biases, whether in leadership or HR. As well as highlighting how the tech sector is broken, she shares how we can strive to fix it by sharing practical advice on topics from salary negotiations to unbiased recruitment practices.

Her work has been featured in many publications including Elle, Forbes, The Times and The Independent and she has written articles for Bloomberg Opinion. She was included in the Financial Times list of Top 100 Influential Leaders in Tech, Tech Nation’s 50 most prominent and influential voices in Tech and Computer Weekly's Top Women in Tech.