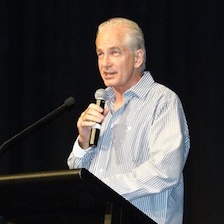 A flamboyant cricketer, David Gower scored over 8,000 runs for England (including 66 consecutive Tests without a duck) before proving equally self- assured in front of camera. Outside commentary duties, David’s interests have included an online stock exchange for fine wines.

One of English cricket’s greats, David Gower has forged two highly successful careers, both in and around the game. His relaxed finesse with the bat became an easy, welcoming style in the TV studio as the lead presenter of Sky Sport's coverage of the game, whilst he broadened also his repertoire and fanbase with several successful years on the panel show They Think It’s All Over.

From scoring a boundary off his first delivery in test cricket, David built a highly impressive total of 8,231 test runs, making him one of the nation's most prolific batsmen. He captained both Leicestershire and England, with the 1985 Ashes victory being one of the highlights of an impressive career that incorporated over 100 test appearances. On international tours David earned himself a reputation as a prankster, most famously when he decided to take a joyride in a biplane, flying over his teammates whilst they played a warm-up match in Australia. After dinner, David delves into his considerable store of anecdotes from on and off the pitch.

After retirement from the game, David's second career as a presenter, initially with the BBC and then with Sky, garnered as much acclaim as his performances at the crease. Praised for a style that was both knowledgable, generous and engaging, he was praised for providing insightful and enteratining commentary for both die-hard fans and more casual viewers of the sport. Away from cricket, David has ridden a bobsled down the Cresta Run, pursued his passion for conservation, and helped run an online stock exchange for wine.

On tour, David earned himself a reputation as a prankster, most famously when he decided to take another player for a joy ride in a biplane. He was fined £1,000 for the incident, escaping further punishment by virtue of the fact he had not released the homemade waterbombs! After dinner, Gower delves into his considerable arsenal of anecdotes, with tales from his extensive career and travels.

Away from cricket, David enjoys a variety of different sports, and has ridden a bobsled down the Cresta Run on several occasions. His passions extend to safaris and vintage port – David even has time to help run an online stock exchange for wine.