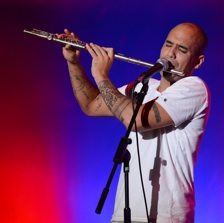 The one-time jungle MC simultaneously beatboxes and plays the flute – inspired by hip-hop, jazz, funk, drum’n’bass and Indian classical music. He performs solo or with The Clinic, featuring rapper, tabla and viola players, cello and keyboards.

With his trademark live ‘Fluteboxing’ (beat boxing through the flute while playing it at the same time), Nathan ‘Flutebox’ Lee’s explosive blend unites hip hop, dubstep and beatbox beats with jazz, funk and Eastern melodies.

Nathan ‘Flutebox’ Lee worked as a labourer for five years after leaving school before he decided to pick up the flute. Since then he has collaborated live and in the studio with a host of cutting-edge and popular artists including The Prodigy, Plan B, The Roots, Nitin Sawhney, Speech Debelle, KT Tunstall, Beardyman, Asian Dub Foundation, Natty, Rodney P & Skitz, Mattafix and Ed Rush & Optical.

Now established as a festival favourite, appearing at Bestival, Womad, Larmer Tree and Glastonbury, his unique live show has spread across Europe, the Caribbean, the Middle East,South East Asia and the US. Nathan can perform solo or with his band The Clinic, taking the crowd on a ride through Asian streets and London clubs via New York block parties.

The Magnets A Capella Band