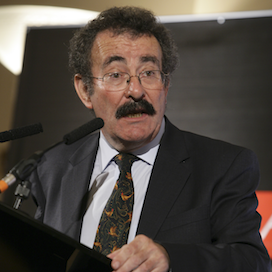 Robert is an expert in fertility, a leading voice in the genetic engineering debate and a natural presenter. In Bad Ideas? he examined how all human progress from farming to medicine to urban living has made us more vulnerable. He’s now working on an app to help new parents care for their babies. Robert takes on big moral and practical questions. Can we look to technology to solve problems it has created? Where does genetics stop? Is it wrong to play God?

Widely regarded as our pre-eminent expert in reproductive medicine, Lord Winston is Professor of Science and Society and Emeritus Professor of Fertility Studies at Imperial College. He runs a gene transplant research programme in the Institute of Reproductive and Developmental Biology, where the team have achieved significant advances, particularly in endocrinology, IVF and genetics.

Lord Winston has been Chancellor of Sheffield Hallam University and Chairman of the Council of the Royal College of Music. In the field of politics, he sits on the Labour benches and speaks regularly in the House of Lords, particularly on science, education, medical ethics and the arts. He is chairman of the House of Lords Select Committee on Science and Technology.

A seasoned and popular television presenter, Lord Winston wrote and presented Superhuman, The Secret Life of Twins, Child of Our Time and the BAFTA Award winning The Human Body. He presented five series of Your Life in Their Hands for the BBC. In addition to his science-based programmes, Lord Winston displayed his musical abilities in Play It Again, where he learned to play a saxophone, from scratch, in five months. He has even appeared in an episode of The Archers, as a fertility expert.

A regular contributor to Any Questions, Question Time and the Today programme, Lord Winston has also appeared on Have I Got News For You, Start The Week and Desert Island Discs. He has contributed articles to all the national newspapers and to journals ranging from The Spectator to Good Housekeeping.

Much in demand as a conference speaker, Lord Winston explains how the human mind is expanding exponentially and advocates greater trust in scientists, in everything from food scares to climate prediction. As an after dinner speaker, he is thought provoking and engaging covering his career, his views and his wide interests with a terrific sense of humour.

“As erudite, charismatic and amusing as he is on TV.”