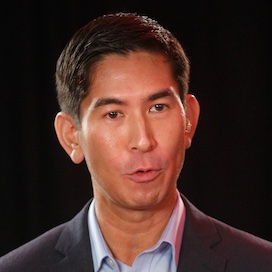 In a career that encompasses the UN, Google, Facebook and SpaceX, as well as political speechwriting, Dex offers a rare insight in to the intersection of politics, technology, leadership and society. Referring to some of the world’s biggest and most influential companies and individuals, he examines important questions of trust, automation, innovation and values. Looking at the positive and negative effects of an increasingly connected world he sees ethical dilemmas, new types of job, competing priorities and a focus on purpose.

Dex Hunter-Torricke has worked with some of the world’s highest-profile leaders and organisations, advising them on areas of communication and thought leadership. Amongst others, he has worked as a speechwriter and advisor for Larry Page and Sergei Brin, Mark Zuckerberg, and Elon Musk’s SpaceX. He now serves as Head of Communications at The Oversight Board, the independent body established to tackle and steer the responses of Facebook and Instagram to the most challenging content issues of the day. He brings together communication, policy, leadership and technology, looking at how business, government and society can both understand each other, and work together better.

Starting his career as a speechwriter in the office of UN Secretary General Ban Ki-Moon, Dex then moved to Google, working with the company’s founders and other senior leaders. He then joined Facebook, serving as personal speechwriter to Mark Zuckerberg and becoming closely involved in a number of company projects, including widening internet access to some of the poorest and most remote parts of the world. He then led communications for SpaceX before returning to the UK as a director at the global communications consultancy Brunswick Group, working in particular with their technology clients. In between, he has also written extensively for US presidential candidates and European political leaders and is a New York Times-bestselling ghostwriter.

Examining the intersection of technology, government and society, Dex considers the power of innovation to change the world, and the implications. From how professions will be disrupted by AI to the dangers of increased global connections being replaced by internet ‘blocs’ as the likes of Russia and China seek to control their nation’s access to information. He examines the key trends in the tech and political sectors, considering the challenges of greater connectivity, and the importance of greater cooperation. Whilst being positive about the power of technology to empower, create and unite, he gives a balanced view of how it’s also changing the world, including ethical, regulatory and political concerns. He reflects on the world of work and how it's changing culturally as well as the issues leaders need to tackle from diversity to decentralised decision-making. He also offers a glimpse into how companies like Google and SpaceX operate, innovate, communicate and develop leadership and strategies, as well as how the Oversight Board offers a model for other organisations struggling to deal with conflicts around content, values, personal freedoms and profit.

From a more traditional communications perspective, Dex also considers how best to deal with crises. As ethical challenges and errors of judgement are increasingly a public concern, how can organisations put these problems in context, engage internal and external audiences, and secure their reputation from short-term but significant damage? He also reveals how leaders in the public eye deal with both personal and organisational priorities, and how they communicate a vision for the future that is compelling, real and revolutionary.