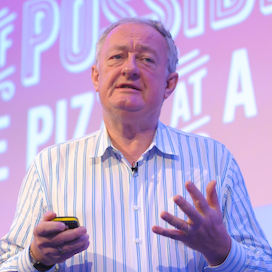 David learned about retail as a Tesco buyer, before leading their expansion in underdeveloped markets in Eastern Europe and moving to Walmart in the US. Lured back to the UK, he took over at Halford’s as recession took hold – growing it against the trend. He quadrupled online sales before taking charge of the pizza delivery giant in Europe. In presentations David examines the lessons for supply chain collaboration, productivity across different regions, trying out new concepts and customercentricity in all channels.

David Wild served as the UK CEO of Domino’s Pizza, one of the UK’s largest franchise operators, for over five years. Prior to the takeaway chain he was CEO of Halfords, the bike and car parts retailer, and a Non-Executive Director of Premier Foods.

David worked in food manufacturing on the marketing side before moving into retail at Tesco. He spent six years sourcing fruit and veg, under line manager Terry Leahy, before overseeing the supermarket’s expansion into the home entertainment sector. When Tesco began expanding internationally David oversaw development into the new markets of Hungary, Poland, the Czech Republic and Slovakia. As Chief Executive of Tesco Central Europe he successfully grew five hypermarkets there before moving to Walmart.

As President of Walmart Germany David was at the helm of a company losing millions of dollars each month, so he made the brave decision to close down the operation, overseeing its lucrative sale to Germany’s largest supermarket brand. He moved to California as Walmart’s VP of New Business Development, quickly recognising that the proposed move into smaller, local stores (as Tesco was trying to do) wasn’t suited to the US consumer market. The larger, out-of-town store model remained and prospered.

David moved back to the UK to become CEO of Halfords, a position he took six weeks before Lehman Brothers crashed. He led the company firmly through the recession, growing its business significantly and quadrupling online sales. He also integrated a new growth stream, Halfords Autocentres, and closed some of the smaller, local stores; an example of the migration away from the high street towards a more multi-channel approach. He went on to head Domino's Pizza Group, the operators of franchises across the UK, Germany and parts of Europe in a market undergoing significant competition and disruption from online delivery platforms that any supplier of any size could use.

In speeches David discusses the need to branch out, something he recognised in the pre-internet days at Tesco, and his experiences of leading different types of teams around the world. He emphasises the importance of the customer but also of the team around you, and has a wealth of experience of leading organisations through difficult periods from recessions to market disruption and digitalisation. He can also touch on issues such as turnaround and restructuring, governance, management and leading complex organisations.

“David did a great job in a difficult slot”

The Grain of the Customer