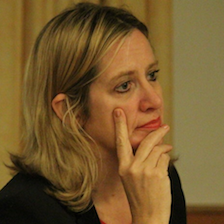 Before serving as only the fifth woman to hold one of Britain’s Great Offices of State, Amber represented the UK at the Paris climate change conference as Energy and Climate Change Secretary. As Home Secretary she led calls for tech companies to take greater responsibility for the spread of radicalising content online. After also serving as Work and Pensions Secretary and Women and Equalities Minister, Amber left the Government amid the bitter arguments over the pursuing of a no-deal Brexit policy.

After around 20 years working in business, Amber was elected MP for Hastings and Rye. Shortly after entering Parliament she was appointed to the Department of Energy and Climate Change, first as a minister and then as Secretary of State. She led the UK delegation at the conference that concluded in the Paris Climate Change Agreement. The United Nations Climate Change Conference, or COP21, resulted in the landmark legal commitment to reduce carbon emissions and limited global temperature increases.

Amber was then appointed Home Secretary, only the fifth woman to hold one of the Great Offices of State. During her time at the Home Office she led calls for an international response to the sharing of radicalising material online in the wake of a number of terrorist attacks. She insisted the tech companies and internet service providers take responsibility, monitor and remove such material. The subsequent foundation of the Global Internet Forum for Counter Terrorism (GIFCT) successfully reduced the amount of radical material on the internet.

After time as Secretary of State for Work and Pensions and as Minister for Women and Equalities, Amber left the Government and the Conservative Party in objection to the policy of potentially pursuing a no-deal Brexit. Standing down at the following general election, she remains an active voice commenting on the wider political scene, climate change, and security. Amber also co-hosts the Split Opinion show on Times Radio, is a trustee of the charity The Climate Group, and advises specialist insurerer Pool Re and cybersecurity company Darktrace.