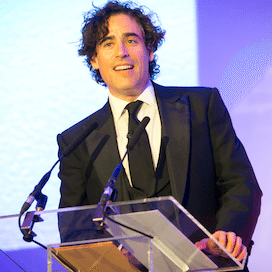 Stephen, Just a note to thank you very much for hosting the reed.co.uk Short Film Competition Awards. Twenty-four hours on and I've lost count of how many people have told me how much they enjoyed your address. The personal touches really made it and it felt spot-on for the night. And thanks again for bearing with us with the last-minute technical changes!

Another exceptional act recommended by Ben at JLA. Stephen Mangan's finely honed performance charting his personal quest for awards glory perfectly matched the theme of our 2013 OTC Marketing Awards. He was a pleasure to work with and happily posed for photos with the guests. In the words of Brigit Jones - bit of a crush actually!

Delighted that JLA pushed him as much as they did. He was funny, charming and importantly respectful of the event and the audience. A massive hit.

We were absolutely thrilled with Stephen, he was a pure professional to deal with on the night and kept the audience both laughing and completely enraptured during his speech. And even when they got a bit noisy as they can do, he managed to pull them back and get on with the show. Absolutely fantastic and everyone I have heard from seems really pleased so thank you so much for organising yet another big success for us.

What can I say? What a nice guy – Stephen was absolutely delightful to work with and was a true professional; he made my life so easy. The audience loved him; he brought real star quality to the event. He had to put up with being snogged by a man and a woman and coped with this with fun and grace (poor chap!) . He even got someone to cartwheel to the stage and managed a random individual coming up to collect an award he hadn’t won!

He was a great choice for our Awards. Our objectives were to not only have a celebrity in the room on the night, but to also have a great co-host for our Awards and someone who would bring their own personality to the night which he absolutely did. He was exceptional.

We were very pleased with Stephen as choice of host for our Awards! Stephan was friendly and professional on the night and went down very well with our audience. Stephan tailored his hosting specifically for our audience and was also very confident handling them as they got noisy. Big thanks again to Stephan, we highly recommend him as an awards host!

Funny, charming and genuine. Stephen was a big success, and genuinely encouraged and celebrated with the winners onstage.