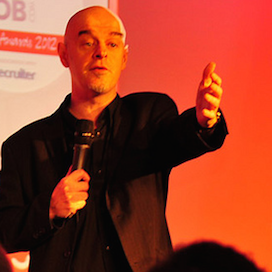 Paul Thorne was an extremely professional presenter who entertained and held the audience well during the introduction. Paul also handled the tough job of keeping to a tight schedule during the awards presentation very well and I would recommend him as a presenter for any future event.

Paul Thorne was excellent at our recent awards in Leicester. He held the audiences attention, was extremely funny even with a tough crowd. He ran the awards in great time and was very professional. I would recommend him for any awards evening, he made the running of the event smooth and less stressful.

Paul did his homework and his act included references to our industry that were entertaining and he was hilariously funny. He was quick, witty and his riotous rapid-fire comebacks to hecklers were outstanding! He also included his views on current news items that everyone could relate to – everyone agreed he was the funniest comic we’ve ever had at this annual event! The audience loved him and mobbed him afterwards – it was an added extra for us and our guests that Paul mingled with everyone after his show – this was really appreciated. I have received many emails and all commented on how funny Paul was and that his act was pitched perfectly!

Paul was particularly ‘adaptable’ as due to hotel situation we got even later with him starting than was scheduled which I know was a concern anyway. He took it in his stride and went for it. Also he did some great links to our industry which made it even better. My only complaint – he kept picking on me as I said I was a Scot!!!

Paul was excellent, we had a conference call beforehand and he arrived early for the rehearsal. His 10 minute routine at the start was perfect and he controlled and hosted the awards brilliantly.

Paul was absolutely fantastic! I can’t thank him and you enough he really did make the evening special.

A wonderful compere. Paul really was a safe pair of hands - he managed the whole event with ease, kept the audience entertained, and incredibly managed to bring our awards ceremony in not just on time, but 20 mins ahead of time, which we were astounded at (and very pleased with!). Usually the awards drag on a bit, but not this year!