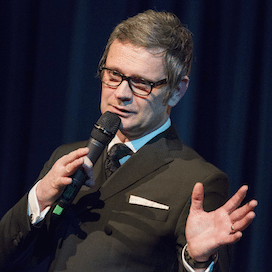 Ian did very well. There were some sound issues at the beginning which Ian handled very effectively. Once the audience had settled down the reaction was very positive and Ian managed to create a good light atmosphere as we hoped.

Federation of Plastering and Drywall Contractors

I wanted you to pass on our thanks to Ian Moore for his great performance at the World Vendor Awards last night. He went down really well with the audience – one client has even asked me to let them know his name, as they may be interested in using him.... Great recommendation.

Ian exceeded our expectations He was punctual, well dresses and easy to get along with. Hi professionalism was evident when working with our script and the AV team and rehearsal / run through before the event. The audience were very reluctant to begin with, however a few anecdotes from Ian relaxed them to enjoy the rest of the night. Even towards the end of the night when the crowd was getting restless Ian would focus them back on the awards at hand.

Ian was fantastic. He fully met our criteria whilst matching the tone perfectly with humour but also recognising the importance of the awards being given out on the night. The audience was a little cold to start (as expected) but once they settled down they were impressed with him and by the end of the night they were in full swing and thoroughly enjoyed themselves.

Ian was very professional and a delight to work with, very easy going. He incorporated a number of our sponsor names into his set which went down very well. The audience responded really well to his humour which I think was very funny and just what we needed after a long conference day.

Ian was an absolute star, he both did his own 15 minute set and acted as compere for us in a cabaret show. His routine was funny and he clearly used the background document to get some relevant gags in for this niche audience. His introduction pieces were humorous and functional giving the tech team ample time to set up the next act. For event organisers who can’t afford a “TV name”, Ian was exceptional value – funny, quick witted and able to engage with the audience beautifully. He was attentive to us as organisers, asking in between acts if we needed any mentions, or whether we were happy with timings. For other potential hirers, I say, get this man before he becomes a star – you will not be disappointed.

I just wanted to say a huge thank you to Ian for making the Bett Awards 2013 such a brilliant night. There has been lots of great feedback on the Awards, especially Ian's performance which was really well received. And his co-hosting with Philippa Forrester, they worked so well together. It was such a pleasure to work with Ian as always. Please pass on my thanks to him for his wonderful performance and impressively professional hosting!

Ian was a joy to work with. Ian had appeared as the entertainment at our annual dinner previously but this was the first time we had combined the dinner with an awards ceremony. Ian’s professionalism and his hosting abilities ensured the event was a great success. Ian’s material was very well received by the audience. I’m sure he gained some new fans and advocates. He hit the tone required perfectly. Pound for pound the best available.

Ian was good - it was a slightly difficult gig but he worked well and adapted his set well to the audience.

Brilliant! Ian was very professional, a dream to work with, his act was perfectly pitched and he made some relevant jokes, which is always goes down well.

Thank you for your recommendation of Ian, he was great on the night and really easy to work with. Please thank him from us and we will certainly consider him as a presenter for future events.

A fantastic host at the two awards ceremonies that he recently helped us with. His jokes were fresh and funny and the audience loved him at both events. He was fantastic at keeping the proceeding flowing smoothly and was a real pro. I would recommend Ian as a host for any event.

The team enjoyed Ian’s visit immensely. There were rave reviews! Thank you very much for your hand in getting him over to us.