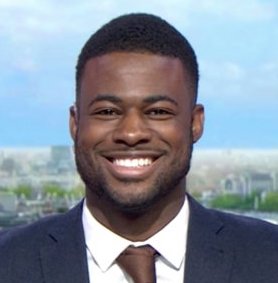 Ben’s journalism exposes important issues around sexuality, gender, race and inequality. A senior reporter for VICE, he was previously the first LGBTQ Correspondent at the BBC where he shined a light on key issues affecting the LGBTQ community. In speeches, he shares his own experiences as a gay Black man and expresses the importance of education.

Ben Hunte is a senior reporter for VICE World News, investigating stories about LGBTQ people, race, and inequality from across the world. Previously, Ben was the BBC’s first LGBTQ Correspondent, reporting on stories surrounding sexuality and gender, before becoming the BBC’s West Africa Correspondent. He is one of the UK's most recognisable LGBTQ broadcasters and his in-depth journalism led to several viral reports.

Before moving into journalism, Ben worked as a Strategy Manager for Google alongside growing his YouTube channel, with over 100,000 followers. He left to become a full-time influencer and train as a journalist, starting his journey reporting for Channel 5 and ITV news, hosting shows on BBC Radio 4 and then a news anchor for BBC News Africa.

One of the BBC's youngest correspondents, Ben journalism exposed many issues including Poland’s ‘LGBT-Free Zones’, the government’s failure to record LGBTQ suicides, electric shock ‘conversion therapy’ and the rise of hate crimes during the pandemic. He is open about his own experiences as a Black gay man and is passionate about not only serving the LGBTQ community but educating those less familiar with the issues affecting the community.

Ben has a strong track record of delivering agenda-setting original journalism online, for TV,  and radio.  He has been named on both The Guardian and DIVA Magazine’s Pride Power and has won several awards for his journalism.