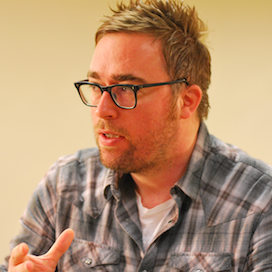 The Yes Man and Join Me founder has tested the nation and explored Awkward Situations For Men. Danny Wallace is a comic writer and presenter who has worked with some of Britain’s brightest comedians and performers and has produced a host of acclaimed books based on his unusual adventures.

Danny Wallace is a modern Renaissance man. Author, radio and TV presenter, actor, columnist, screenwriter, he’s also led his own ‘cult’ movement and been head of a self-declared nation state based in his bedroom.

Having started out as a writer on Dead Ringers and The Mighty Boosh, Danny’s mainstream break came when he challenged his flat-mate, the comedian Dave Gorman, to find 54 other people called Dave Gorman. The award-winning stage show, book and BBC series Are You Dave Gorman? followed.

A prolific author, Danny’s work includes both stories based around somewhat madcap personal experiments, and more conventional novels. In Join Me, Danny ‘accidentally’ set up a cult in which members had to perform a random act of kindness every Friday (Good Fridays). In Yes Man, he decided to say yes to everything offered to him, particularly those things he would normally have said no to. The book became the basis for a film starring Jim Carrey.

Danny has also written books about his journey to the centre of the universe (a manhole cover in Idaho), his attempts to find his old school friends, and how to deal with modern dilemmas in Awkward Situations For Men. In F*** You Very Much: The surprising truth about why people are so rude he offers a sociological and psychological take on rudeness, how the epidemic has expanded, how it affects others and how to combat it. He has also penned two comic novels, Charlotte Street and Who Is Tom Ditto? as well as the series of Hamish children’s books.

On TV, Danny wrote and presented How to Start Your Own Country, in which he started his own country and examined what a country actually is. He also fronted BBC One’s He's Having a Baby, Danny Wallace's Hoax Files, Castaway, and an episode of Horizon looking at whether a chimp could be classed as a person. He has played quizmaster on School’s Out, co-hosted Test the Nation with Anne Robinson and presented shows on BBC 6Music, Xfm and Absolute Radio. He’s acted in The IT Crowd, and won a Bafta for his performance narrating the video game phenomenon Assassin’s Creed and has written for publications from The Guardian and The Times to Elle and Cosmopolitan.

‘Danny was brilliant - a lovely guy, a delight to work with and perfect for the event.’