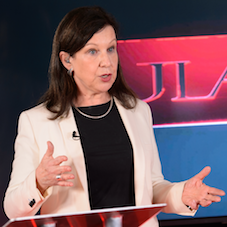 As well as covering stories and events on the ground Lyse has produced documentaries on Syria, Gaza and Afgahnistan, the latter a major focus of her more recent reporting, and fronted the Radio 4 series Her Story Made History, in which she interviews some of the most influential but overlooked women in modern politics, journalism and campaigning. She has received many international awards for her journalism and reporting, including Emmy, Peabody, and Sony Gold awards, as well as being appointed a member of the Order of Canada and an OBE, and has served as a Council Member of the Chatham House foreign affairs institution.