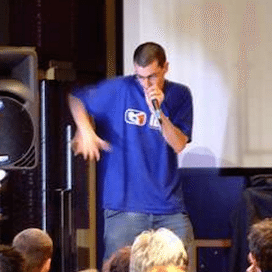 Leading beatboxer Shlomo has worked with artists including Damon Albarn, Jarvis Cocker, Lilly Allen, and Ed Sheeran. Performing at events and festivals all over the world, he has stunned audiences with his vocal gymnastics. Live, he performs solo or with his eight-piece vocal group The Vocal Orchestra. He can also run interactive workshop events. A TEDx speaker Shlomo also examines the creative process and how technology is changing the world.

One of the world’s foremost beatboxers, Shlomo is also at the forefront of innovating the skill of beatboxing combining it with new musical styles and genres. Shlomo is known for his experimental collaborations with a diverse range of artists including Damon Albarn, Ed Sheeran, Lily Allen, DJ Yoda, Björk, Martha Wainwright, Basement Jaxx, Jarvis Cocker, and his own beatbox troupe The Vocal Orchestra.

A classically trained drummer and percussionist since childhood, Shlomo moved to jazz drumming in his teens, and then adapted what he learned to creating rhythmic structures vocally. At university his beatboxing overtook his degree studies in astrophysics and he was soon touring the world, working with artists like Björk, appearing on BBC2’s Later...with Jools Holland, and becoming an artist in residence at London’s Southbank Centre.

Shlomo has gone on to become one of the world leaders in beatboxing, a Guinness World Record holder, a TEDx speaker, a festival regular, and a winner of the highest prize in beatboxing, the World Loopstation Championship. He also written music for plays, ads and films, including a new score commissioned by the BFI for Alfred Hitchcock’s Downhill and a piece for the National Youth Choir which saw him nominated in the British Composer Awards.

A phenomenal exponent of the art of beatboxing live and on record, Shlomo also uses beatboxing in education, working with schools and youth projects, as well as leading team-building exercises. As well as performance he also writes his own music software working on realtime manipulation of sound. He speaks about the power and nature of creativity and the creative process, as well as about how technology is changing the world.

Shlomo can perform solo or with the eight-piece beatbox choir, The Vocal Orchestra.