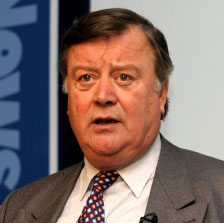 Ken served in every Conservative Government from Heath to Cameron, and laid foundations for growth as Chancellor under John Major. He argues that the big global problems are deficit and debt, which have to be addressed. An outspoken Europhile he also considers the prospects for UK-EU relations and the future of politics in a divided society.

Ken Clarke was one of the longest serving MPs in modern times. In Parliament for over four decades he served the Heath, Thatcher, Major and Cameron administrations. Respected by all sides of the parliamentary divide, his views on the economy, law and order, and Europe are occasionally controversial but always important and informed.

After becoming a barrister Ken was drawn by the call of politics. He unsuccessfully fought the safe Labour seat of Mansfield before winning Rushcliffe near his home of Nottingham, a seat he would go on to occupy for almost 50 years.

Appointed as a Whip in the Heath government where he was first exposed to key discussions over Europe, Ken went on to serve as under Thatcher in Health, Education, Transport, Employment, as Paymaster-General, and in the Department of Trade and Industry. He continued as Education Secretary in the Major administration, where he became a key figure serving as Home Secretary and famously as Chancellor. In the midst of a recession, Ken’s stewardship of the economy through the mid-to-late 90s is still viewed as one of the most successful in recent times and laid the foundations for future growth over the following decade.

After the 1997 election Ken stood for the leadership of the Conservative Party but narrowly lost out and returned to the backbenches for the first time in over 20 years. Seen as the only Conservative voice with the credibility to challenge then Chancellor Gordon Brown, Ken was made Shadow Business Secretary. In the David Cameron government he was appointed Secretary of State for Justice and Lord Chancellor before becoming Minister without Portfolio.

After 49 years as an MP, Ken finally stood down having served as Father of the House and as a leading pro-EU voice in the divisive Brexit debate. Throughout his time in politics, Ken has maintained liberal and pro-European views often at odds with many in his party. His comments on industry and the economy have always commanded headlines, sometimes because of his close direct links to business. Ken has served as Deputy Chairman and a director of British American Tobacco, as Chairman of Unichem and Deputy Chair of Alliance Unichem, and as a non-exec director of Independent News and Media.

Away from politics Ken is famous for his passion for sport (particularly football, motorsport and cricket) and jazz music, being the only serving MP to host their own regular radio programme on Radio 4, Ken Clarke’s Jazz Greats.

“It was a great evening and the guests had plenty of questions for Ken which he was more than happy to answer and discuss.”