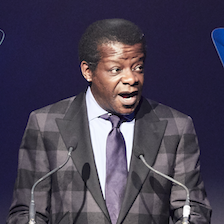 What a lovely man! Such a personable presenter and a very funny comedian who likes to interact with the audience.He presented an award show for us with a 10min cabaret spot at the top of the show. Just one thing to be aware of... your event could over run as you can lose track of time very easily as he finds something funny to say about everything and all of a sudden your caught up in the laughter!Looking forward to working with him again soon!

Stephen was a great presenter. He listened to our brief and objectives during rehearsal and worked well with our ‘voice of god’.Stephen was very approachable and had a good attitude towards all our staff members and the crowd itself.

Stephen presented our Awards last night and was fantastic!He was very professional, listened to the brief, was hilarious and kept the audience engaged - a tough feat when there are 26 categories to get through!The headline sponsor, who has sponsored the Awards for the past ten years, said he was the best presenter we've ever had.

Stephen did a great job for us and the feedback from the audience was great. He was very funny in his 10 mins and then had a very relaxed attitude for presenting.My only problem was when he asked for a bottle of champagne to take home with him and refused to take no for an answer! Slightly needy. Hence the less than brilliant feedback.

Extremely professional, and really got the corporate thing. Very pacy and got through the 26 awards at just the right speed. Cabaret was excellent, pitched it just right. 'The next rising star'

Stephen mastered the industry and the audience instantly. Friendly and professional, we were very impressed and would recommend him any day!

"Stephen K Amos was great. He took the audience by the scruff of the neck and really made it work. He had great energy, really engaged with the audience and was very, very funny. He did swear a bit but it was in context of his set and doesn’t seem to have upset too many people."

Fantastic - Stephen was really excellent. There was lots of laughter and we had one of the best responses we have ever had.