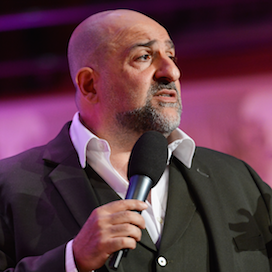 We'd previously had bad experiences with presenters so Omid was a BIG sigh of relief. Not only was he approachable and friendly but he was keen to take on board direction and really used his brief in his stand up routine, making jokes about the MD, the company and its rivals. He was funny, risky but not too risky and best of all got the crowd going with his topical humour. Would 100% use again.

Omid was absolutely first class. He got the audience's attention right from the start and went down a storm.

Omid was very easy going and keen to ensure he pitched his performance at the right level for the evening. He asked questions about the audience during rehearsal so that he could have some banter with them. The audience found Omid really amusing and he kept their attention well during his performance at the beginning of the evening. During the awards presentation he kept the flow of the evening going with a bit of banter with the winners.

Omid was fantastic, really well received. His act was pitched perfectly - he came back down for a drink afterwards, which was really appreciated.

Very warmly received, he met all expectations. The length of performance was testament to how well he did with the audience.