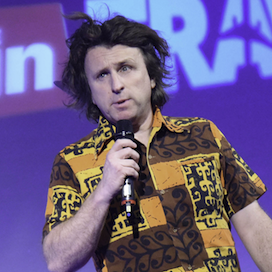 Milton had the audience laughing throughout, and afterwards could be heard quoting the jokes in the bar. The morning chairman on Day 2 even featured one of Milton's jokes in his opening address. I have recommended him to several colleagues.

Excellent. Quick-fire, slightly surreal and very funny. The audience were in hysterics.

Milton held the audience well and was very well received - with numbers exceeding 1300, no mean feat!

Milton did very well. The audience found the comedy fresh and refreshing – the laughter was across the whole of the room.

Milton Jones was a pleasure to work with and everyone really enjoyed his performance.

Milton was such a brilliant host at the Travolution Awards on Monday evening. He was thoroughly enjoyed by everyone and we have had great feedback – folk trying to remember his fab one liners all over the place. He also kept their chattering and nattering very well under control and that is a very great skill indeed!

Such a hit with the audience - he had everyone in stitches.