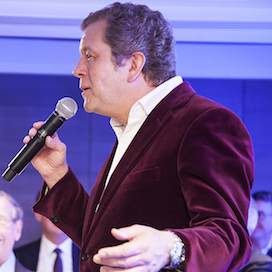 Jon Culshaw is fantastic. His ability to capture audiences both live and by film really does give energy to the event.

Jon provided an amazing array of vocal impressions including one of Uri Geller that was so good, Uri Geller's wife was fooled - until she turned round. Really easy to work with, Jon made it his business to get on with guests and ensure his part of the evening ran smoothly.

Jon was very flexible and had an easy ‘can do’ approach with our client, Defaqto. He had clearly researched the company information and impressed the CEO by knowing his name. The audience enjoyed Jon’s impressions and particularly enjoyed one which was about insurance – ‘had an accident which was not your fault?’ as the audience were from insurance, banks and other financial sectors. The audience enjoyed calling out names for Jon to impersonate.

Jon’s act was very well-received, his material was sharp and funny, his interaction with the audience was great. He proved himself to be the best in his profession once again. But the key thing to the success was how well he ran the quiz. Thank you Jon, Well done him, we’d love to have you again.

Jon was absolutely first class, and brought a different feel to the presenting and I think it was just what was needed in today's climate - he really is a professional and covered so many voices, including Sir Trevor and Huw [Edwards - previous presenters] which was amusing!!

Jon did a great job. The initial feedback from guests has been very good, and I would have no hesitation in recommending Jon to colleagues and clients.

Jon was cooperative and thorough in his rehearsals and preparation on the day. He was amenable and totally professional during the actual event itself - as well as being very funny of course!

I have had nothing but positive feedback on Jon from our Senior Management Team and he was well received by our audience. Our crowd is not the most bubbly or easy to please, yet Jon had them laughing their heads off and even banging on the tables - a first at this event!

The audience thought Jon was great. He was also a very nice man and pleasant to work with

I just wanted to thank you for attending and speaking at our annual dinner last week, your impressions were very entertaining and certainly went down vert well with our members and their guests. In particular you're impression of me went down a storm! The event overall was a huge success and we have a lot of positive response. Thanks also for the assistance with the "Charity Draw". I had some concern this might be a dead slot in the evening and something of an anti climax but your relaxed style and quick quips ensured this was not the case.

Jon was charming and entertaining, however I was slightly disappointed that his act included approx 50% of the same material that it did when we booked him 3 years ago. Also, he didn’t seem as energetic as he was then.

Jon Culshaw was the perfect entertainment host, with impressions and humour ideal for the average age of Picon’s membership. Furthermore he was very engaging with all contacts at the meal table and comfortably posed with many members who requested selfies.