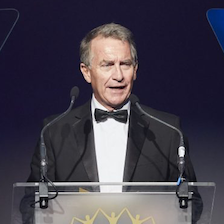 “Garry did a wonderful job. He was professional, very funny and adapted his stories to our audience.”

“Garry received a standing ovation from a very tough crowd”

Garry was spot on; an entertaining and professional host for our company quiz. Many of the audience sought me out afterwards to say how much they enjoyed his performance.

I just wanted to write and thank-you very much for your contribution to the Enfranchisement Awards 2009. We have a received some excellent feedback from our guests, sponsors and judges and I know that your presentation played a significant role in making the event a success. Your tips on the night were also very helpful in making the event run smoothly – and aside from all of this, you were also very enjoyable company on my table! I hope that we will have another opportunity to work together again – Best wishes & thanks again

Absolutely spot-on. Garry was a true gent - very easy to deal with and pleasant. Garry went down a storm - feedback has been excellent

Probably the most professional speaker I have ever worked with. Really really good.Did all we asked of him and more besides. His insight helped us shape our event and it was a huge success.Cannot recommend him highly enough! And also a thoroughly nice fellow .

Many thanks for recommending Garry Richardson as our celebrity host for the evening at our awards ceremony last week. He did a great job and was a thoroughly nice fellow. His anecdotes were very funny and he kept the evening flowing. Although we don’t tend to use the same celebrity twice, I would recommend him to others.Thanks again.

Garry is a first class and genuinely funny after dinner speaker whose subject matter has appeal across a whole variety of audiences. He is sharp and witty, in a modern way, without ever giving offence. He reminds all the men that they were once boys dreaming of being sports stars and he briefly brings their dreams within touching distance. His wholesome, self-deprecating humour appeals equally to the women in the party, something not always mastered by his peers. He is a man who clearly takes the trouble to understand his audience and to prepare his material and delivery accordingly. At the same time he is alert and fleet of foot deftly picking up and responding to the audience's reaction. He entertained and charmed at the Health Shield AGM, not the easiest of things to do.

Garry spoke at our annual awards dinner, and from around a month before the event he became involved in making sure that his after-dinner speech went as well as it possibly could. Garry advised on room layout and structure of the entire evening, all of which helped to ensure we got the most we could out of Garry's attendance. Garry's speech was funny, fast-paced and full of energy. He had the audience with him the entire time and received a standing ovation at the end. His offer of a charity auction was gratefully received and helped to raise a not insignificant amount of money for a local charity. Garry was professional throughout, meticulous in his planning and preparation, and most importantly of all, he played a huge part in ensuring the event was a success and will live long in the memory. I would have no hesitation in recommending Garry to others. Thank you Garry!

Our decision to engage Garry for our Regional AGM and Raceday proved to be a good one. Garry is a consumate professional and asked detailed questions about our organisation and guest make up before the event. He was obliging when I asked if he might run a short auction at the end of his talk and kindly offered to donate an experience visit to boost our charity appeal for Teenage Cancer Trust, which added substantially to our collection. Garry amused and held our audience with a seamless flow of anecdotes gathered over his 42 years with the BBC. Finally he was happy to linger and chat with guests that wanted to say hello. Many thanks Garry it was a pleasure engaing you. Bernard NFRC L&SC

Garry proved an excellent choice as a speaker for our dinner. His speech was entertaining and funny and he went out of his way to ensure he did all he could to make the evening a success from the moment he arrived.

He did an outstanding job and kept the audience engaged and amused throughout. Very professional and a joy to work with. I would highly recommend him and will most certainly be booking him again for future events.

Our Ladies Night is the prestigious event in our calendar and with a capacity attendance at the Chester Grosvenor then our guest speaker needed to be good. Garry was superb. His presentation was amusing, reflective and hugely enjoyable. A presentation that was 'smut free' also helped to "hit the nail on the head".Moreover, Garry was super to deal with - great communication prior to the event and then generous communication afterwards made my task as organiser stress free.Highly recommended.

Great with our delegates, his after dinner talk went down really well too.  Really entertaining but clean – perfect for our audience.