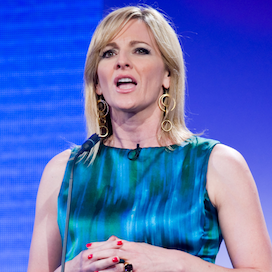 The one-time gymnast has written for The Times and performed standup for Sports Relief alongside her more regular roles hosting football, rugby, athletics and Olympics coverage

Gabby Logan is one of the country's best known sports presenters. She's fronted the BBC’s Inside Sport, Final Score and live coverage of the FA Cup, as well as coverage of rugby, athletics and the Olympics. She is also one of the hosts of the Sports Personality of the Year show.

From a background steeped in sport, Gabby is the daughter of Leeds United and Wales footballer Terry Yorath. She had success at schoolgirl level as a rhythmic gymnast when she represented Wales in the Commonwealth Games, and also played netball and competed at university in the high jump. Gabby joined Sky Sports soon after graduating before moving on to present ITV’s Premier League, Champions’ League and World Cup coverage. Going over to the BBC she became only the second woman to front Match of the Day. She has gone on to host coverage of both football and rugby world cups, world and European championship athletics, as well as events including the Olympics, the London Marathon, and the Boat Race. Gabby's also a regular guest host on The One Show, and presented her own show on Radio 5 Live, bringing a light touch to a mix of sport and current affairs.

Alongside presenting Gabby's a regular columnist for The Times, has appeared on Would I Lie to You?, Room 101 and 8 Out of 10 Cats, and has tried her hand at standup comedy for Sports Relief. She also competed in Strictly Come Dancing, where she was controversially voted out before her husband, Scottish rugby player Kenny Logan.

‘The enthusiasm she instilled was excellent.’