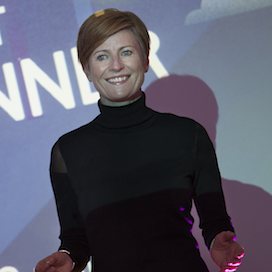 Nicky was the British Army’s highest ranking female officer, stepping down as Brigadier after 30 years in leadership roles. As HR Director she was in charge of promotion, appointment and development. Having led diverse groups within a traditional organisation, Nicky explores how to attract and retain a wealth of talent amid rapid and significant changes of threat, policy, technology and resources. She also sets out the role of leaders in driving inclusive change.

Nicky Moffat was Britain’s highest ranking female Army officer, retiring as a Brigadier. In almost thirty years of service she held a range of personnel, administration and leadership roles.

Joining the Army as a second lieutenant, Nicky rose quickly through the ranks of the Adjutant General's Corps to the rank of Brigadier. With women excluded from serving on the front line, Nicky served in various support, training and administration roles specialising in leadership duties.

As Company Commander in the Army Training Regiment, Nicky lead a team of instructors responsible for the induction of recruits into the Army before moving into management and training for all Army Land Forces across the world. She worked at the Ministry of Defence where as well as strategy, policy and finance roles, she worked as Private Secretary to Secretary of State for Defence Geoff Hoon. She formulated and communicated the Government agenda on defence, including on operations in Iraq, Afghanistan, and Sierra Leone.

As Training Unit Commander, Nicky delivered leadership, management and technical training to Army personnel and civilian staff. She designed and implemented system and process improvements in training, staff development and career management for staff from all backgrounds, at all levels, and spread across the country. As Director of the Army's 5,000 HR, Finance and Administration specialists, she was responsible for the Armed Forces Redundancy and Pay Review Programme, providing decision and advisory briefing to Ministers and the Defence and Service Personnel boards. She was also responsible for officer promotion, appointment and career management.

Throughout her career, Nicky has led diverse groups in an organisation both steeped in tradition but subject to rapid and significant changes of policy, technology and resources. She has taken leading roles in administration, planning and training including instructing officers in the art of leadership. She gives a perspective on the role of strong leadership in driving inclusive change and optimum performance.

As well as leadership, Nicky also addresses training, career development, and women in leadership roles and in organisations more generally. She advised Army Board members on the retention and progression of female talent and now offers practical advice for employers who are looking to attract, develop and retain diversity of talent. After leaving the Army she has worked to bring her leadership and talent expertise to the private sector, and was also one of the instructor/assessors on BBC2’s Secret Agent Selection:WW2 which saw members of the public undergo the Special Operations Executive recruitment process of the 1940s. “Timely, succinct and able to handle a wide range of perspectives”

The thing that struck me most when I last saw Nicky speak was how many managers in the audience were avidly taking notes. She offers such tangible advice that it’s hard not to write it down straight away. Add some fascinating anecdotes about her experiences in the army, and she more than proves her point about the value of care and consistency in whichever industry you work. You come away from her speech with a couple of tips to try immediately! JLA Agent Scarlett Atherton